This site uses cookies to provide and improve your shopping experience. By continuing to use this site, you agree to accept these cookies.
For more information, please see our Cookies Page
More Info
Ok
Mon - Sat: 10AM-6:30PM
Jersey's Largest Electrical Retailer 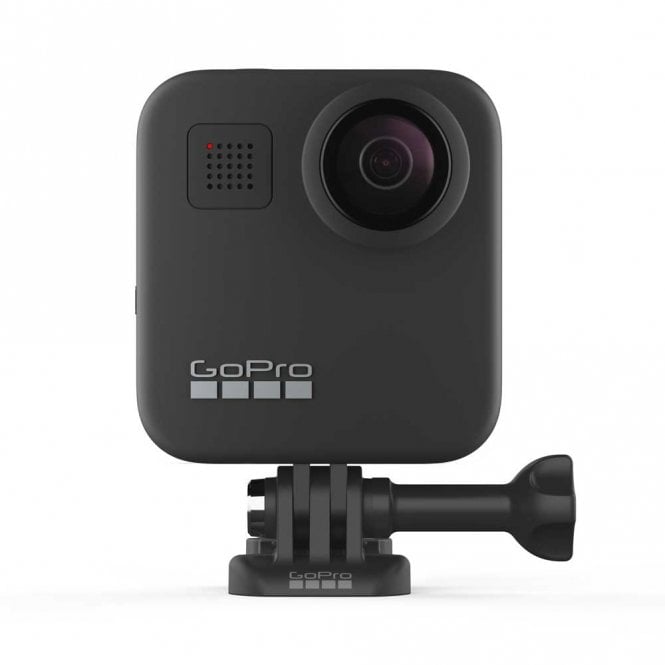 Classic HERO-style skills. Spherical-capture wizardry. Unbreakable stabilization. Make way for MAX, the most creative GoPro ever. Capture traditional GoPro video and photos or shoot 360 footage of everything around you. Snap a panoramic shot without having to pan—just point and click. Choose a digital lens to capture your footage exactly how you imagine it. And with six mics onboard, you get immersive 360 audio and the best sound we’ve ever delivered.

Horizon Leveling
In HERO mode, game-changing horizon leveling gives you that silky-smooth cinematic look whether you're getting sideways, flipping through the air or chasing your kids.

PowerPano
Pano without the pan. Take incredible 270° distortion-free panoramic photos without having to scan the horizon. Plus, capture motion shots and epic selfies.

Directional Audio
Directional audio in HERO mode lets you prioritize sound from either side of the camera, no matter which lens you’re using—perfect for vlogging.

Digital Lenses
Choose from four digital lenses in HERO mode to get the shot. Capture video and photos in Narrow, Linear, Wide and Max SuperView—our widest view yet.

Max TimeWarp
Capture super stabilized time lapse videos while you move through an activity. In HERO mode, TimeWarp automatically adjusts speed based on motion, scene detection and lighting. You can even slow down the effect to real time—savoring interesting moments—and then tap to speed it back up.

Intuitive Touch Screen
Be a smooth operator. With a touch screen, it’s easy to control your camera. Or frame up your shot, play back footage and snap a selfie in HERO mode.

Live Streaming in 1080p
Shoot in HERO mode and share while you’re there. Live stream in 1080p on social, get Max HyperSmooth stabilization as you broadcast via the GoPro app and save footage to your SD card to check out later.

In-Camera Stitching
With in-camera stitching, it’s super easy to offload and edit your 360 footage in the GoPro app.

Reframe + the GoPro App
Use the app to easily reframe 360 footage into traditional videos and photos you can play back, edit or share.

Compact Design
With a light compact design and folding fingers, you can go anywhere and capture everything.

On-Screen Shortcuts
Customize your screen with the quickest way to find the features you use most.

Portrait Orientation
Capture photos and videos in portrait orientation—perfect for your Snapchat and Instagram Stories.

Photo Timer
Jump in there. A photo timer makes it easy to grab a GoPro selfie or group shot with your whole crew in the frame.

Short Clips
Capture 15 or 30 second video clips that are just the right length for sharing.

Rugged + Waterproof
MAX is rugged and waterproof down to 16ft (5m). And if you really want to get after it, shoot with the included Protective Lenses.

GPS + Motion Sensors
GPS captures your location, altitude and speed. To share your feats of greatness, add GPS performance stickers to your videos in the GoPro app.1

Scene Detection
In HERO mode, MAX knows if you’re in the snow, at the beach, under water and more. This helps the GoPro app handpick the best shots and turn them into amazing videos.

Auto Backup to the Cloud With GoPro PLUS
Offload videos and photos from MAX to the cloud—automatically. GoPro PLUS even lets you upload from mobile for ultimate on-the-go convenience.2

Fast-Charging Ready
Get back out there faster. The optional Supercharger power adapter charges your battery up to 38% quicker.3

Compatible With GoPro Mounts + Accessories
Wear it. Mount it. Love it. Over 35 compatible mounts and accessories help you capture your story.

Please note: We are only able to ship to Jersey, Channel Islands

Buy online at powerhouse.je before 12pm and enjoy delivery the next working day.

*Delivery of American style refrigeration or range cookers will incur a charge of £49.99

If purchasing an American style fridge freezer or range cooker online and arranging delivery, please select your preferred delivery date and a member of the Powerhouse team will be in contact with confirmation of availability. As our delivery team for these larger appliances is sourced externally, we cannot guarantee your chosen date will be available but will liaise and confirm a date most convenient for you.

You are welcome to collect your purchase(s) at any time during Powerhouse opening hours from the Customer Collection Depot at Queens Road. Please allow up to 2 hours to collect your order. Please ensure that you bring your order confirmation reference and photographic ID, i.e. passport, driving license or bus pass.

If you have a valid driving license you are welcome to use our courtesy van free of charge (subject to availability).

We cannot modify the delivery address entered at the time of your order.

If an order is placed online with a delivery address that differs from the card registered address we will carry out security checks to protect you from fraud.

In the event that you need to return anything, we're here to make things as easy and straight-forward for you as possible.

That's why we offer a 28 day no-fuss returns policy from the moment you receive your order.

All you have to do is return the item(s) to us in-store or we can arrange this on your behalf, usually within 5 days, at no cost. If the item is in pristine condition we will offer a full refund in the form of a Powerhouse gift card, or a replacement if preferred.

To find out more, please read our Terms & Conditions of Sale.

We cannot offer refunds or exchanges, unless faulty or not as described, on any of the following:

Where a product has been specially ordered for you, unless faulty, we're unable to refund or offer an exchange. We're unable to accept cancellations for these orders, unless within 48 hours of the order being placed.

For the return of any items where the packaging has been opened or damaged since purchase, a 20% restocking fee will apply.

This does not affect your statutory rights.

Be the first to review GoPro MAX. Write a review
?
x
Top